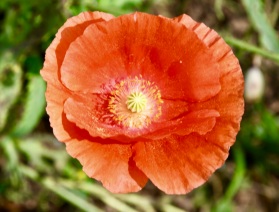 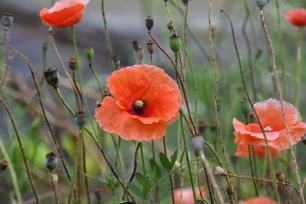 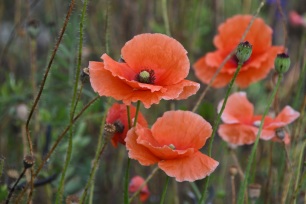 Traveling in Louisiana, I visited the Mississippi River at Vidalia. I went down along the banks under the two wonderful bridges that run side-by-side like sisters holding hands and skipping between Louisiana and Mississippi. How different the river looked from that perspective! Trees stood up to their hips in the flood water and I watched as a batch of lemony leaf-boats left their roots and floated downstream––free at last.

Crossing the bridge there, where the waterway flows more than a mile wide, I drove up into the hills. The view from the bluffs made me draw a deep satisfying breath. The air was sweet as iced tea. It spread in all diections and the sun met it and reflected the sky in the current. Moving from the bluffs to under them on the Natchez side, I came to a street partly submerged with sawhorses blocking off the flooded parts. A narrow waterside walking park was almost under too.

On the berm along the water’s edge, poppies swayed as the muddy waters passed by. The scalloped petals waved for attention like flags boasting the reds and oranges of a summer sunset. They seemed not to grasp the peril they faced: would the flood take them too? Would their soft-as-tissue-paper-in-birthday-gift-bags petals follow the fallen leaves in their quest for adventure?

The red blooms recalled the day each year of my childhood when veterans in uniform stood on downtown corners and beside dime store entryways passing out paper poppies in memory of soldiers lost in the wars. Every man in town sported one tucked in his buttonhole or shirt pocket. Dad was a vet, so he always had extras for us. I kept mine till they grew ragged.

I pulled off my sandals then and dipped my toes in the river––just so I could brag back home that I had. The water surprised me; I expected it would run ice bucket cold, but it was the temperature and color of leftover cappuccino found in a car on a chilly evening.

Just at the river’s brink, my legs sensed movement of the ground with the washing, lapping rhythm of the flood tide and I quickly retreated, yet the slender twisty stems of the poppies and the seed pods with their little crowns and the pink tips of buds still waiting in line to burst from backstage to star in the show, were not afraid of the water’s powers.

I watched a tugboat push a barge ten times its own length under both spans of the bridge and heard it’s warning horn bellow like an angry bull. Cars crossed the bridge high above the river in both directions. Their drivers hurried to work, to school, to church, home, to stores, to meetings, the mall, the movies, or to a lunch with friends. They paid no mind to the tug and barge, nor to the poppies waving greetings from the watery bank––nor to me. 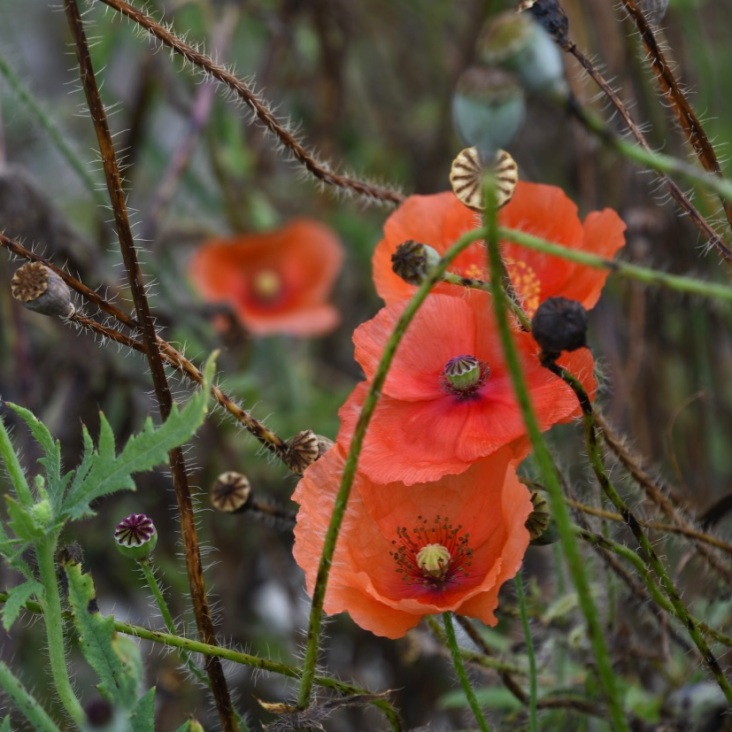 2 thoughts on “Planted By Water: The swollen muddy Mississippi River dressed in poppies”