An old hotel built of stone, old schools, roadside motel and a rock house abandoned to undergrowth are reclaimed eventually by the prairie that mothered them.

Have you driven past this old hotel in Muskogee? I’ll bet you have. It was last used as a hunting supply store and is located on highway 16 which enters Muskogee from the West and is named Okmulgee Street.

This was the front office. It is overgrown with vines, signs are gone and windows are missing. The rear cabins each stood separate and housed one traveling family.

The cabins are constructed of flat native stones as are many park cabins and shelters that were built by the W.P.A. in the dust bowl days of the Great Depression. 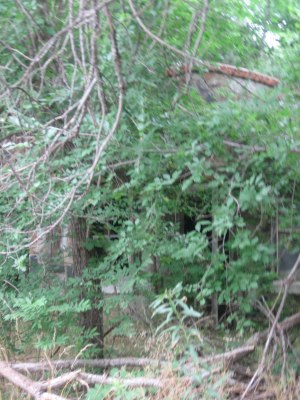 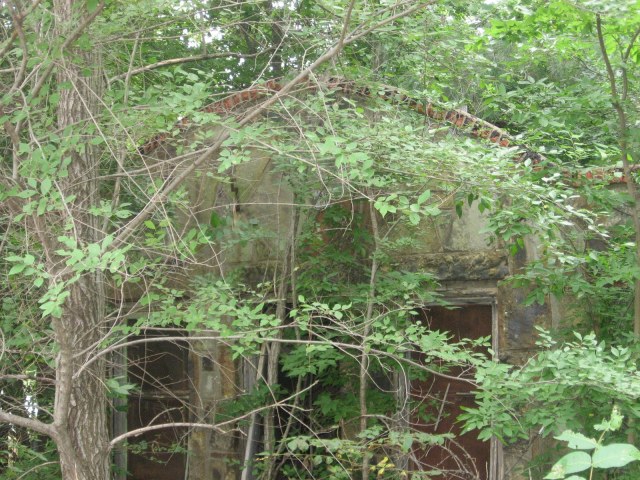 The arch above each “cabin” was outlined with bricks, possibly bricks from the Boynton Brick Factory. Now the property is abandoned and the prairie has reasserted itself in every crack and crevice. Shrubs and grass and weeds and trees are breaking up concrete and stone work.

Time and weather have rotted doors and window frames. Animals have found shelter along with hobos and vagabonds. Neighborhood children may have played here and teens lingered in the forsaken roadside rooms.

At night I imagine owls haunt the spaces.

What was this place like in 1950? I imagine an old car parked at one of the cabins, a father carrying a box of food and some luggage to the door. A child is playing in the grassy area out behind the motel. A mother seated in a old wooden chair nursing her baby in the welcome shade of a Osage Orange tree.

God has erased the scene with time and change and covered it with vines and branches, grass and wildflowers. I heard birds singing overhead, cicadas thrumming their afternoon songs, and wind like ghosts moving in the shadowy places making leaves shiver.The prairie wins!

A daily selection of the best content published on WordPress, collected for you by humans who love to read.

The Art and Craft of Blogging

The latest news on WordPress.com and the WordPress community.